The Need to Master Arabic

The uniqueness, richness and beauty of the Arabic language need no introduction. The internet is filled with lectures and articles encouraging Muslims (and non-Muslims) to pursue the language. It is not the aim of this article to merely add another entry to the list. Instead, this article seeks to articulate the need to master the Arabic language, noting some errors made in interpreting the sacred texts by those who have only learned Arabic to an intermediate level.

Since the consequences of erring in understanding literature (or ‘reading comprehension’, as it is called in English) can have countless implications, it is inevitable that such implications will be of a large range: some being more serious than others.

An appropriate example of this type would be how many speakers interpret the following verse of the Qurʾān:

“Take provisions along; for the merit of (having) provision is to abstain (from begging).”[1]

Due to a misunderstanding, many translate this verse as ‘the best provision is Taqwā.’ Not only is this interpretation disconnected from the context of the preceding verses; a brief reflection on the sentence structure itself will demonstrate why such an interpretation is invalid: the latter part of the sentence cannot be an elaboration (bayān) highlighting the reason behind the command in the former.

Similar is the case with a commonly misinterpreted ḥadīth. The following has been narrated from the Prophet ﷺ:

“A house containing vinegar is not in need of curry.”[2]

As is clearly understood from the above, this ḥadīth is worded in the past tense and is to be understood in the present tense. This is usually translated as: ‘A household which has vinegar will never suffer from poverty.’ However, when looking at the full ḥadīth in context, the popular translation does not seem promising. The ḥadīth of Umm Hāniʾ ؓ reads:

“Allāh’s Messenger ﷺ entered [my home] and asked: ‘Do you have anything [to eat]?’ I replied: ‘No, except dry bread and vinegar.’ The Prophet ﷺ then said: ‘Bring it; for, a house containing vinegar is not in need of curry.’”[3]

This ḥadīth shows the simplicity of the Prophet ﷺ: one should eat from whatever is available, even if it is something which is usually considered mundane – like vinegar – as opposed to insisting the host to prepare lavish foods. In no way can it be understood that anyone having vinegar will never become poor – and Allāh ﷻ knows best.

Among the more detrimental errors made in interpreting scripture is the classic example of the Karrāmiyyah, a deviant sect, legislated and promoted fabrications attributed to the leader of both worlds ﷺ. Among their justification for this was the following ḥadīth:

“Whosoever deliberately lies upon me, let him reserve his seat in the Fire.”[4]

Some adherents to this sect misunderstood the preposition ʿalā, here, to mean ‘against’ – that is, the opposite of ‘for’ or ‘in favour of’. Hence, they said, “we lie in his favour, not against him.”[5] As Ibn Ḥajar al-ʿAsqalānī  ؒ rightly said, this is ignorance of the Arabic language.[6]

It is no wonder the righteous scholars of the past had warned against being ignorant of the language. Al-Aṣmaʿī  ؒ, the great imām of Arabic, said:

“The scariest thing I fear for a student of knowledge when he does not learn grammar is that he falls into his ﷺ statement: ‘Whosoever lies upon me, let him reserve his seat in the Fire.’”[7]

“The vast majority of those who deviated in Iraq [did so] out of their ignorance of Arabic.”[8]

“[…] because to speak on the Qurʾān and Sunnah without knowledge is pretentious – and we have been prohibited from adopting pretense – and is falling into the meaning of the ḥadīth where he ﷺsaid: ‘[…] until when there remains no scholar, people will elect ignorant leaders who, [when] asked, issue verdicts without knowledge; they will err and mislead others.’[9] [This is] because when they do not have the Arabic language to resort to with regard to the Book of Allāh and the Sunnah of His Prophet, they will turn to their foreign understanding and intellect incapable of following evidence; thus, they go astray from the right path.”[10]

It can be concluded that it is an imperative to not only learn Arabic, but to master the language to perfection in order to correctly access the deeper meanings of the Qurʾān and Sunnah. There is more than just one way to achieve this. A recommended method for those who have passed the age when they can pick up a language naturally, is to formally study the fundamental Arabic sciences, then read profusely.[11]

For those who are familiar with Arabic and are parents, Dr. ʿAbdullāh al-Dannān, the Arabic expert, has a brilliant (and tested) technique which can facilitate one’s children to grow up speaking Fuṣḥā Arabic, without having to compromise their social language – whether that is colloquial Arabic or, in our case, English. Parents or not, the research is definitely a must-read for every indignant individual with a passion for the Arabic language.[12]

Shaykh Shahin-ur Rahman was educated in and graduated from IDA, Leicester. After gaining some experience in instructing Qurʾanic literacy as well as teaching the national curriculum, the Shaykh founded Al-Rahma, a daʿwah platform and online blog. A thinker, educator and writer, he joined Safar Publications, where he remains to this day as a curriculum writer. Shaykh has also completed a master’s degree in Islamic Education: Theory and Practice at the University of Warwick (2021). 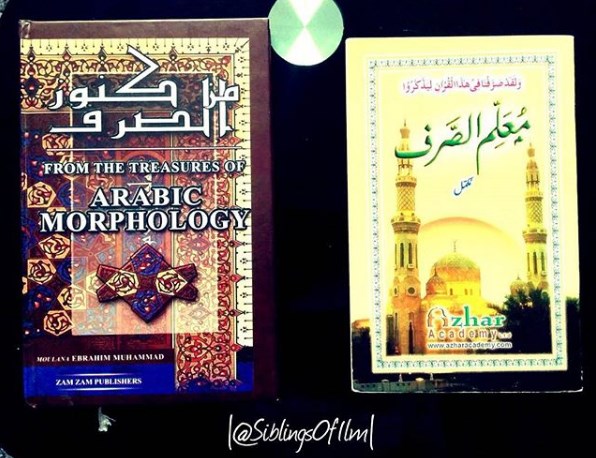 Artist Transforms Arabic Words To Illustrate What They Actually Mean